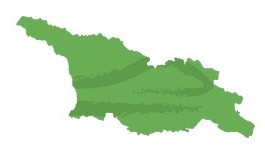 In Ajameti Managed Reserve dendroflora is represented with 60 species, and a thin understory cover with: rhododendron, medlar, sweetbrier and hawthorn.

From the species of the “Red List” of Georgia one of the main dignities of the managed reserve are rare Tertiary relicts - Imeretian oak (Quercusimeretina) and Zelkova (Zelcovacarpinifolia). Also there are other species from the “Red List”: Pastukhov ivy, Georgian hazel, elm, wych elm, wingnuts, nuts and more.

In Ajameti Reserve common mammals are: rebbit, fox, jackal, squirrel, weasel, badger and dormouse. The biggest indigenous animal in the reserve is roe.

There are more than 60 species of birds recorded in the reserve. Among them there are only twent-one nesting species in oak forest, other birds appear during migratory or winter period.

Amphibians represented in the reserve are: one species of triton, marsh frog, common and green frogs. Reptiles – grass snake and water snake.

From  the existing caves of Imereti Protected Areas only Sataplia Reserve and Managed Reserve are explored botanically.

Sataplia Reserve is located in the damp subtropical zone. 98 % of the territory is covered with young Colchis type subtropical forest. These areas are dominated by beech forest – with boxwood understory and hornbeam forest – with Oriental hornbeam understory. From Coniferous trees there are yew (TaxusBaccata). There are 67 woody species recorded in the reserve area, among them 30 species are trees and 37 – bushes. From the represented species 59 are deciduous and 8 – evergreen.

Almost half of the woody plants are relicts. Among them are Caucasian hornbeam, Georgian oak, Eastern beech, chestnut and others.

There are 482 species of herbaceous plants.

Here are three Caucasus and one Georgian endemic.

There are 12 species of mammals, 5 reptiles, 4 amphibians and 30 species of birds in Sataplia Reserve. From large mammals here can be found jackal, badger, marten, Caucasian squirrel, European reabbit and fox, rarely wolf and deer.

A beautiful view of Colchis forest is filled with various species of birds. The Reserve is the domain of swallows, Caucasian finches, chiffchaff, blackbirds and jays. There areas are often visited by hoes, quail and woodcock.

In Sataplia territory there are grass eater and prey dinosaur tacks are preservedspread in different geological epochs. These tracks are collected in a quite small patch, this means that theis place was the chosen spot by dinosaurs. Dinosaurs found here are divided into separate groups by scientists and are reffered to Satapliyasauarus: Sataphliazaurus dzotsenidze, Sataphliazaurus tchabukiani; Sataphliazaurus gabunia and others.

Accoridng to the existing data there are 8 species of birds and one species of bat in Sataplia Reserve and Managed Reserve. These are:  grZelyura mRabiobi (Myotis bechteini Kuhl.).

From birds there are: Lesser kestrel, owl, Levant Sparrowhawk, long-legged buzzard, greater spotted eagle and others.